There’s more to pork chops than just sprinkling them with salt and pepper and throwing them on the grill. Why not add some spicy flavor straight from the Southern United States in the form of fresh peaches and Tennessee whiskey? Sounds like a great combination to me! After all, you can’t serve up boring pork chops to your grilling guest – you have to add some gusto.

This recipe is one I included in my Great American Grilling Cookbook for quick and tasty meals. So don’t worry if fresh peaches are not available as I’ve made this dish as easy as possible. Canned peaches are fine, it’s our secret! Now on to some amazing grilled pork chops!

Bring on the Pigs!

So, how did pigs come to the United States from Europe and Asia? We can thank famous pork loves Christopher Columbus, Hernando de Soto, Hernando Cortez, and Sir Walter Raleigh according to the National Pork Board. Columbus landed in Cuba with eight pigs in 1493. Hernando de Soto landed near Tampa Bay in 1539 with thirteen pigs that grew to over 700 by the time he passed a few years later. Then Cortez followed up the pork trend as he is credited with introducing hogs to New Mexico in 1600 and Sir Walter Raleigh brought sows to Jamestown Colony in 1607.

Ain’t that a Peach!

People from Georgia may think they are residents of “The Peach State” but that’s not the case! In fact, when you dig into the stats you’ll find Georgia far down the list of peach-producing states. According to the most recent statistics from the government, Georgia is No. 7 on the list behind states such as South Carolina and Colorado. Wait, Colorado? Georgia produced 10 thousand tons while Colorada growers hit 10.75 thousand tons. California tops the list with 541 thousand tons of peaches!

READ NEXT
How to Grill Pineapple: Your Complete Guide

Choose your pork cut at the grocery store and get ready to enjoy a fantastic recipe. I’ve used this method with pork chops, steaks, and lamb. The Great American Grilling version of this recipe was done with thick bone-in pork chops. And, Tennessee Whiskey is defined by state law as a whiskey produced with the “Lincoln County” process of slow filtering through charcoal while being stored in barrels for years! Only seven Tennessee whiskey producers meet this requirement including Jack Daniels and Geroge Dickle.

For the pork chops

For the Whiskey Peach Glaze

Heat a skillet with a small amount of oil. As the temperature rises add in the onions, stir and then add the sliced peaches, and half of the juice from the can if using canned peaches, and onions. Allow simmering for a few minutes then add whiskey, brown sugar, vinegar, and butter. Stir until butter is melted, onions are very tender and well mixed. Allow reducing for a thicker glaze

Grill the chops over medium-high heat turning as needed. Grill to an internal temperature of 145 degrees. Brush heavily with Peach and Whiskey Glaze before removing from grill. Serve hot with your favorite sides. Oh, did you know Jack Daniels uses the spelling “Whiskey” while George Dickel uses “Whisky” without the letter e. 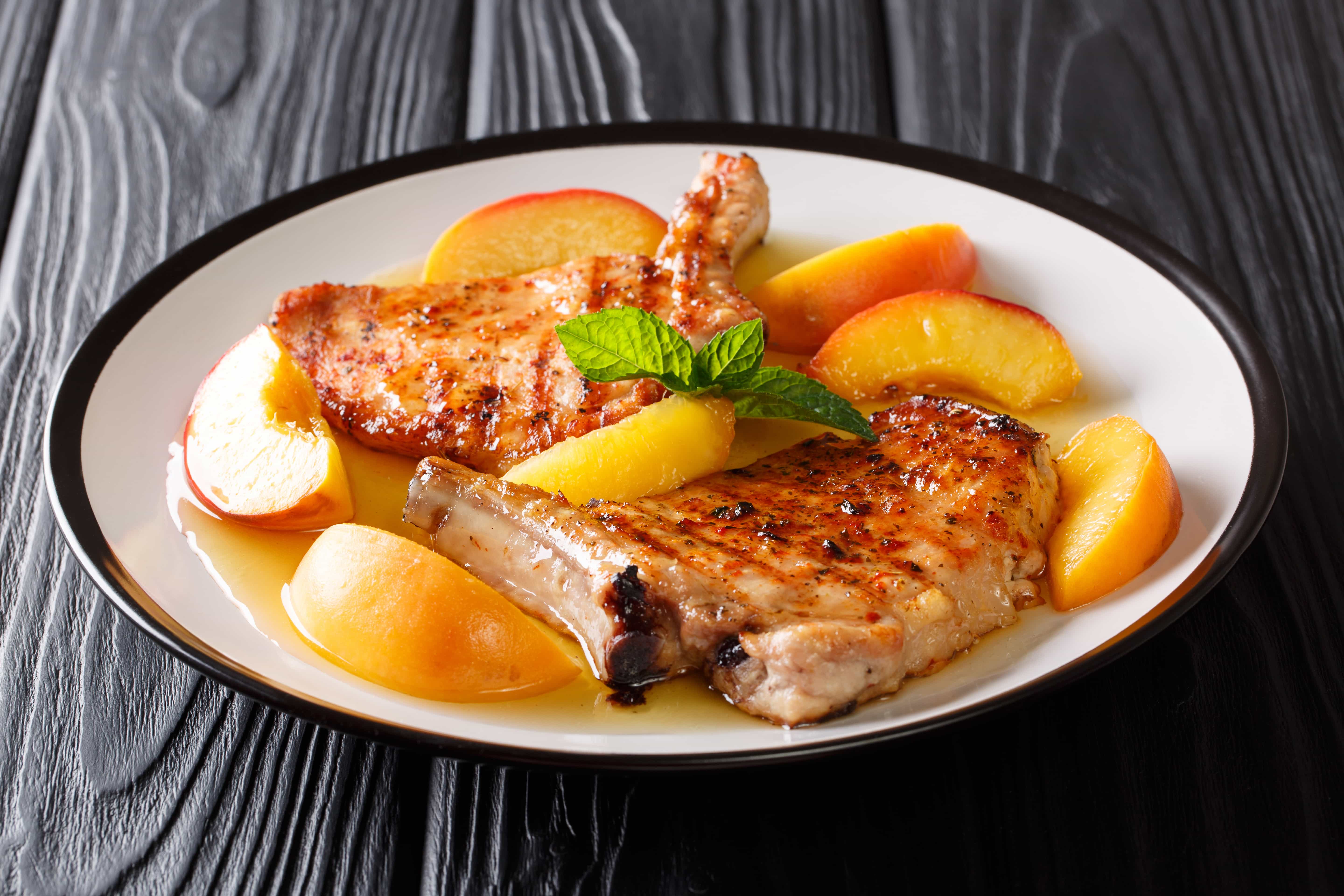