Grilling tuna can sometimes be tricky. Read on to learn the top tips you need to know for grilling tuna.

The tuna is one of the world’s best fish from the sea. We take it for granted, but it’s one of the tastiest fish. It’s so delicious, almost every country has a recipe for it.

While tuna sustainability in the oceans is a common problem, we can’t deny how we all love it. It’s healthy, it’s delicious and it grills nicely.

If you’re grilling tuna, you need to know what you can do with it. You want to have the best tuna recipes for that prized cut of fish.

In this guide, we give you everything you need to know about tuna grilling. From the best tuna steak recipes and the top tuna steak marinade to picking the best tuna, we have it here.

Before we learn about the best tuna steak recipe out there, we need to understand how to handle tuna.

Tuna itself is a lean type of fish, with some areas with good fattiness. Much like many types of fish like salmon and sea bass, the fat it has will dry out with high heat.

The Japanese are masters of cooking tuna, with each part of tuna having its own name and uses. The classification is what they call Toro (to melt), a gauge of the fattiness of the meat in tuna recipes. The three common names for the major parts of tuna are the chutoro, otoro, and akami.

Otoro is the fattiest part of the tuna, found near the front belly over the pelvic fin. This is the best quality tuna steak you would want to pan sear rare. It goes best with a simple citrus tuna steak marinade.

Akami is the reddest part of the tuna, found on the entire upper half of the fish itself. Depending on where you cut it, the best part is under the second dorsal fin called senaka. This is the tastiest part you would want to grill or eat as sashimi.

Even the head itself has different delicious parts that you can grill. The problem is they are rare enough that you need to ask the butcher to do it for you.

You want to grill your tuna up to medium-rare and nothing more if possible. This level keeps the tuna cooked enough to be tasty without drying out the meat too much. If you are going beyond medium-rare, you need to do some liquid brushing with some marinade.

READ NEXT
How To Build An Awesome Barbecue Smoker At Home

When making a tuna steak marinade, the first component you want is oil. This will prevent the fish from drying out even if you overdo it, with the best being olive oil. You want neutral oils that can enhance the natural tuna flavor, like corn, peanut, canola or safflower oil.

When making your marinade, you have many options to choose from. The simplest combination is oil, some herbs of your liking, citrus or vinegar, and spices. You can also use soy sauce, sesame oil, salt, and pepper for an umami tuna steak recipe.

For your tuna steak recipes, there are two different style choices when grilling tuna. These are all the way through and heavy seared, both having its own advantages.

Cooking all the way through ensures that you have an even grill of the tuna recipes. This can make even cheap tuna cuts taste great, with the BBQ flavors and marinade going all the way. You cook this straight up on your grill, flipping only once.

Searing allows for the outer side of the tuna to create a crust by subjecting it to high heat. This is great if you have high-grade tuna steak recipes where you want as much natural flavor as possible. You can grill this with a pan or treat it on an open fire pit for a few seconds, flipping to crust all sides.

Tuna Grilling: All The Way

If you want to do a full cook-through tuna steak recipe, make sure your grill is good, hot, and seasoned. Brush the tuna meat with some olive oil, salt, and pepper for the basic flavor. The tuna steak should be around 1-inch thick.

Grill the tuna steak recipe you have for 5 to 6 minutes, flipping to one cheek after. You want to make sure you don’t have too much crust to prevent sticks and burning. Also, you want nice grill marks with soft meat inside.

You can serve this with your own sauce. The easiest can be a garlic lemon butter sauce with some herbs.

If you want to do some searing grill, it would need the same prep work as a full cook-through. The most basic tuna recipes will call for brushing of oil, sprinkled with salt, and a crack of pepper. The thickness of the tuna should be at least 3-inches to leave a rare center.

The best cut of tuna to use for searing is a 3-inches by 3-inches square log of tuna meat. This makes it easier to sear. You want to use a charcoal grill, very hot, oiled and seasoned. Some will grill the tuna straight on a gas burner flame or 2 inches above burning hot chimney coals.

READ NEXT
How To Plan The Ultimate Backyard Barbecue?

If you’re unable or unwilling to use direct heat, you can use a pan for even cooking.

To sear your tuna steak recipe, grill one side in high heat for 40 – 45 seconds. Do it with all the sides, including the front face and the back face of the tuna steak itself. From here, you have two options.

You can cook your tuna steak recipe as is, cutting it into small pieces and pouring the sauce over it. If you want to do this, the tuna will cook a bit further. You can then enjoy your grill seared tuna with a dip or sauce of your choice.

The other option is the tataki-style, a famous style of sashimi in Japan. This will help you enjoy a full-flavored tuna steak recipe by using a special tuna steak marinade.

To do a tataki-style sear, you want a marinade of mirin, lemon, and soy sauce. If you like ginger, you can add that too.

Slice one side with 1/4-inch diagonals with 1/4-inch spaces in between. This will help you slice the tuna steak easier without mushing the meat. Soak the tuna in the marinade for 20 minutes.

Follow the same procedure done with the searing, grilling the tuna at 45 seconds per side. Once you sear the sides, use cling wrap around it tightly. Sink it in an ice bath for a few minutes up to an hour, depending on your tastes.

Remove it from the ice bath and pat it dry with a paper towel. Cut it into small thin slices and plate them like dropped dominoes or stack them over each other. Add your preferred sauce on top or use a dipping sauce.

READ NEXT
A Quick Look At The Best Easy BBQ Ideas

Once you finish grilling tuna, there are different ways to serve it depending on your preferences.

You can serve the tuna steak as is, together with some fixins. This includes things like rice, salads, and even butter rolls.

If you’re searing the tuna steak, a good sauce will be citrus ponzu sauce. It’s a combination of citruses like lemon juice, soy sauce, mirin, katsuobushi (skipjack flakes), and kombu.

You can eat the tuna steak even without any sauces. Tuna recipes are delicious on their own, with a good, mild flavor. The meat will never disappoint your palate, whatever cut you opt to get.

The number one issue that people have with tuna is overcooking the meat. Any tuna steak recipe will tell you that it’s best to cook it in a few short minutes.

For a 1.5-inch steak, 7 minutes per side goes all the way. You want to stay around medium to medium-rare to keep the juices in. Everything is a matter of preference, so adjust the time as you need to.

Grilling tuna is an easy, no-fuss way to prepare this delicious fish. If you want a break from your rich ribs and your steaks, this is it. Tuna steak is a healthy but hearty option. 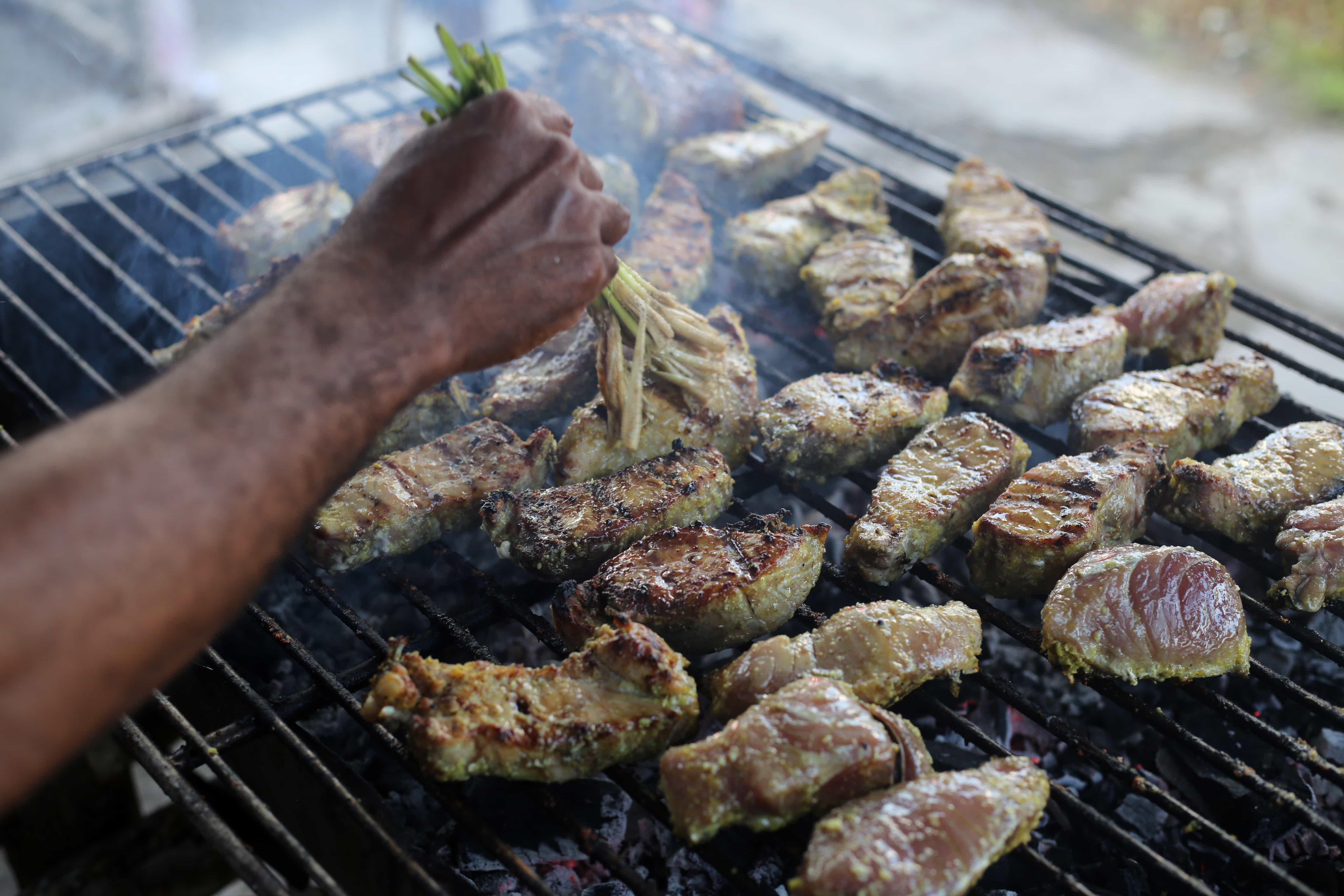