You can’t say you’re a barbecue aficionado without knowing about Kansas City BBQ. But don’t worry, here’s everything you need to know about BBQ, Kansas style.

Check this out: there are over 100 BBQ restaurants to choose from in Kansas City. From strip malls to homestyle joints, eating BBQ is practically a tradition in this foodie-centric place.

Let’s face it. You can’t say you’re a barbecue aficionado without knowing about Kansas City BBQ. But don’t worry, here’s everything you need to know about BBQ, Kansas City style!

You might be wondering: what makes Kansas City BBQ so different? We’re glad that you asked. Next to other barbecue-friendly places like Texas, Tennessee, and South Carolina, Kansas City is a paradise for meat lovers everywhere.

Another thing that makes Kansas City BBQ unique is that its barbeque pits get manned by pitmasters who have won tons of awards. As a matter of fact, some of these pitmasters have been making killer barbecue for decades. On top of that, Kansas City residents enjoy grilling and chilling at home too.

Don’t believe us? Just ask Emily Detwiler of the Kansas City Barbeque Society, who claims that locals literally roll smokers out into their driveways on Sunday afternoons.

Lovingly known as a “cow town,” grilling beef became a rite of passage in Kansas City because so many cattle came into town on the railroads. But the truth is, Kansas City barbeque really originated from Henry Perry – otherwise known as the “father of barbecue”

Back in the early 1900s, Perry started to sell his own newspaper-wrapped meats in a Kansas City trolley barn. Not only did Perry barbecue common meats like pork and beef, but he also threw raccoon and possum onto his grill too. Gross, right?

READ NEXT
How To Clean Your BBQ Grill Like A Pro

Regardless, Perry became so well-known for his BBQ that he was officially known as a “barbecue man” when he passed away. The best part is that his wild barbecue style has carried on throughout the generations. Nowadays, every grill master is grilling up Perry-style BBQ staples like:

Cooked long and slow, these delicious meats get topped off with a huge serving of BBQ sauce. Now known as the world’s barbecue capital, Kansas City has carved out a saucy legacy for itself. But what’s in Kansas City BBQ sauce, anyway?

Not sure what the recipe is for famous Kansas City BBQ sauce? Join the club. Thankfully for you, we’ve uncovered the super-secret details.

Celebrated for its sweet flavor and thick consistency, Kansas City BBQ sauce is typically made with molasses syrup. Normally, this deep, burgundy-colored sauce is also speckled with ground pepper too. And if you’ve ever tried it before, it’s a taste that you’ll truly never forget.

This is crazy: famous Kansas City BBQ sauce is also known for its tangy, vinegary taste as well. Complementing this interesting flavor profile is are molasses and tomatoes. Not to mention a bit of garlic and ground red pepper flakes.

And usually, the final touch involves a pinch of paprika. Are you salivating yet? You should be!

If not, this should do the trick. While most restaurants prefer a sweeter flavor for their barbecue sauce, every BBQ joint likes to mix it up a different way. Although some might serve a thicker sauce. Others are known for thinning it out.

But wait – there’s more. Let’s talk about classic Kansas City barbecue dry rub. Slathered onto almost all of their meats, this savory blend is made from a blend of spices that are added while it’s cooking. And get this.

It’s all about keeping it minimal when it comes to adding dry rub to traditional Kansas City BBQ. However, other barbeque-obsessed places like Tennessee love to lay on the dry rub nice and thick. Meanwhile, Kansas City is all about the sauce!

READ NEXT
How to Clean a Gas Grill: A Step by Step Guide

Let me guess: you’ve never tried Kansas City barbecue meats and sides before. Allow us to enlighten you. In this particular part of the United States, barbecue is usually cooked the “slow and low” method.

What exactly does that mean? Let us explain: slow and low involves cooking meat on a charcoal grill or a pit barrel at around 250 degrees. That’s not all.

One of the most important parts of the Kansas City slow and low grilling method is that you have to cook it for several hours at a time. Sometimes it could take a couple of hours, and sometimes it can take a whole day. Nevertheless, longer grilling times are usually reserved for gigantic pieces of meat.

Although pork is preferred in the Carolina states and beef is favored in Texas, Kansas City doesn’t discriminate when it comes to their meat selections. Yes, you read that right.

Kansas City barbecue is actually renowned for cooking all kinds of different meats, including:

You can’t forget to fill your plate with barbecue side dishes. As a matter of fact, every BBQ meal needs a couple of sides to round of your plate. Of course, there are a few go-to favorites for fans of Kansas City barbecue.

These include anything from a simple slice white bread and baked beans to coleslaw and cheese potatoes. Don’t forget about cheese-filled corn bakes.

Although you may not have much okra served on the side in Kansas City, it’s a common side dish for barbecue fanatics in Tennessee and the Carolinas. But baked beans are a must for every Kansas City barbecue lover.

Want to try smoking your own meat? We highly recommend that you research the best BBQ smokers first!

Drooling over Kansas City style BBQ burnt ends? Every BBQ region in America has its own special way to grill meat. For example, Texans are known for their love of cooked brisket.

However, the most popular type of barbecue served in Kansas City is burnt ends. In case you didn’t know, burnt ends are just a local name for the burnt pieces of meat at the end of a chunk of brisket. And since barbecue is famous for being a “working man’s food,” the charred edges were served as leftovers from grilled brisket.

Additionally, those who mastered the pits became accustomed to eating these sorts of scraps at the ends of their shift. With that in mind, burnt ends have become one of the most well-loved dishes in Kansas City. In fact, you can typically find burnt ends on the menu on any regional barbecue restaurant.

Invented in Kansas City, charred, burnt ends are so yummy due to the amount of fat rendered from the cut of brisket. Thus, burnt ends often have a salty, rich flavor. Don’t know how to tell good from bad burnt ends?

We got your back. One of the key things that you should look for is a carmelized-style glaze on your burnt ends. It should also have a nice consistency, with a lightly charred coating. However, too much char is a big no-no for burnt ends!

Bottom line: if your meat is tough, difficult to chew, and generally disgusting, it’s probably overdone. On the other hand, some burnt ends aren’t cooked enough, which makes them way drier than you’d think they’d be.

Even though burnt ends originated in Kansas City, restaurants are trying their own take on the regional classic too. Thinking about getting your grill on? Check out some BBQ recipes for inspiration!

Ever heard of the  American Royal World Series of Barbecue? Incredibly, the biggest barbecue competition in the nation was held in Kansas City this year.

READ NEXT
13 Tips On How To Charcoal Grill at Home

Taking place in mid-September, the American Royal World Series of Barbecue has hundreds of teams compete from all over the world. As if that’s not enough, pitmasters hailed from faraway places like:

And get this. The American Royal World Series of Barbecue isn’t the only landmark barbecue competition in Kansas City either. Amazingly, there are usually BBQ contests going on in this part of the country year-round.

But don’t get us wrong – there’s nothing more legendary than competing in the American Royal World Series of Barbecue. How do we know this? Because securing the title at this contest will earn you respect from the global grilling community.

It gets better: being the champion of The American Royal World Series of Barbecue could even land some pitmasters the chance to open their own restaurant. What’s more, people are more likely to trust new restaurateurs that have placed highly in the prestigious competition too.

The point is this: whether you’re eating in a fancy restaurant or a small mom-and-pop shop, eating BBQ in Kansas City is essential. How can you beat that?

How to Find the Best BBQ in Kansas City

Want to learn how to find the best BBQ in Kansas City? Our general rule of thumb is that you’re sure to discover it at any of the following barbecue restaurants:

Are you familiar with Arthur Byrant’s Barbecue? For those who are unaware, Arthur Bryant is locally known as the inventor of the famous Kansas City barbecue sauce. And crazily enough, his brother was a colleague of the barbecue legend Henry Perry too.

So when Bryant and his brother teamed up to open their own BBQ joint in the early 1900s, it was sure to be a hit. The proof – journalist Calvin Trillin famously penned, “it has long been acknowledged that the single best restaurant in the world is Arthur Bryant’s Barbeque at 18th and Brooklyn in Kansas City.”

READ NEXT
The Best Charcoal For Grilling: Charcoal Buying Guide

What about Gates Bar-B-Q? Founded by George W. Gates in 1946, Gates Bar-B-Q has expanded to more than five locations throughout Kansas City. Plus, you can buy Gates’ personal barbecue sauce brand at local stores. As a matter of fact, it’s so popular that even presidents like Bill Clinton and George W.Bush have stopped by for lunch.

Another can’t-miss barbecue restaurant in Kansas City is Joe’s Kansas City Bar-B-Que. Headed by husband-and-wife duo Joy and Jeff Stehney, this incredible BBQ spot has been around since the late 1990s. However, they’ve already been voted as the best barbecue joint in town for several years in a row!

Need a hand in the grilling department? Check out a helpful BBQ guide for extra tips!

Still not sure what makes Kansas City BBQ special? Whether you enjoy eating barbecue staples like pork, beef, and chicken or exotic favorites like sausage, turkey, and fish, there’s something for everyone in Kansas City.

From its barbecue sauce and meats to its sides and its burnt ends, Kansas City grilled meats are truly to die for. But don’t take our word for it. There’s clearly a reason why the American Royal World Series of Barbecue was held in this part of the country this year.

It’s simple: Kansas City barbecue is syrupy, savory, and delicious. Served with a healthy dollop of secret sauce, you can enjoy anything from pork shoulder to beef ribs in this self-proclaimed barbecue town.

Not sure how to grill? No worries – you can always book yourself a barbecue-themed trip to try Kansas City meat instead. Your only problem will be figuring out what to eat.

Trust us – if you haven’t already been to Kansas City yet, eating barbecue is a way of life!

Want to learn more about grills and smokers? Check out our blog today! 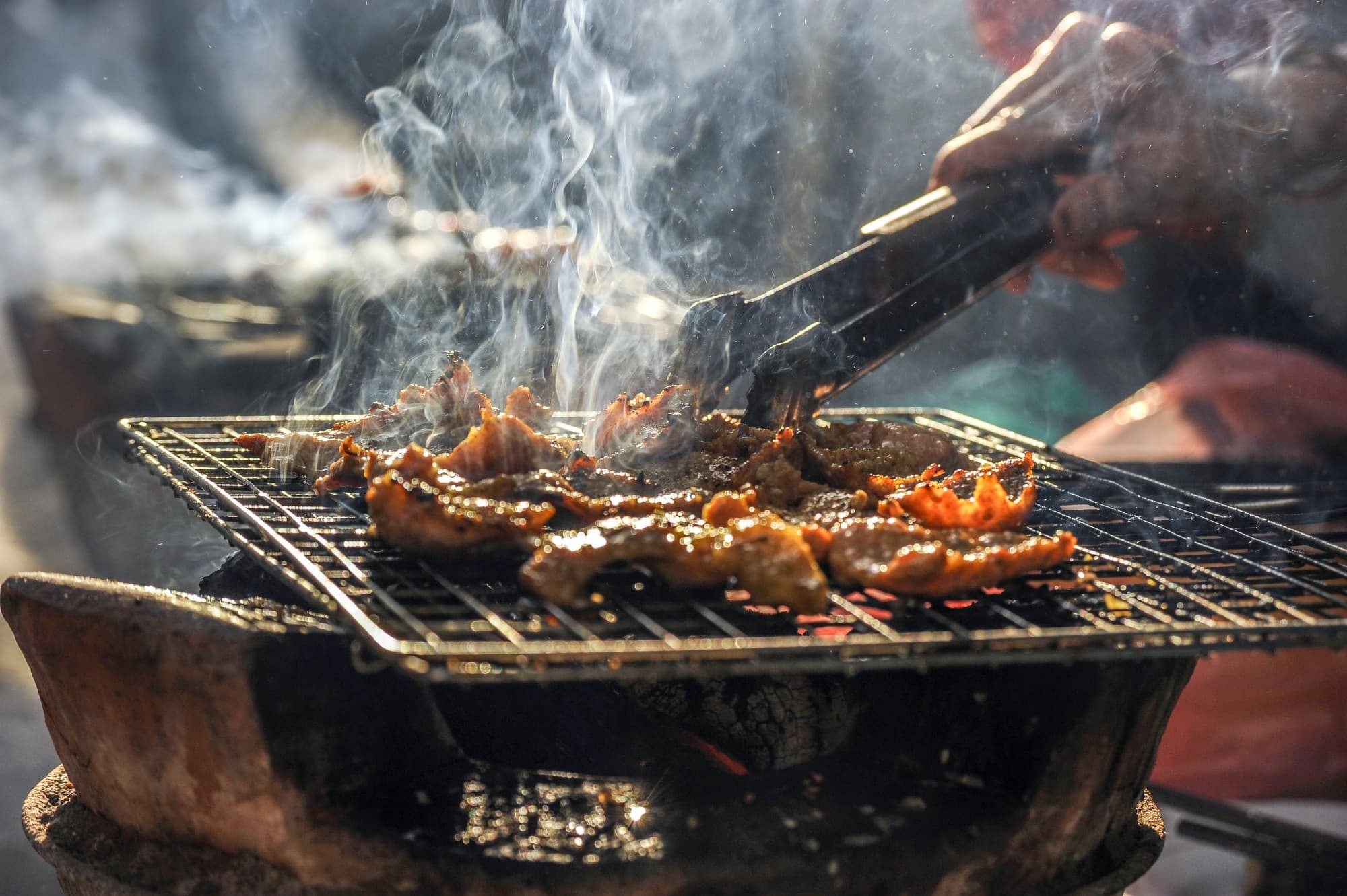 How To Choose The Perfect BBQ Grill Cover

Common BBQ Grill Myths Debunked And Why It Is Dangerous To Believe In Them!

How To Build Your Own Cool Barbeque Grill At Home

How To BBQ And Grill While Camping