Lighter fluid is the bane of the backyard barbecue artist, even though 70% of people still use it to start their charcoal grills. Here’s how to how to light charcoal without lighter fluid.

While it’s a handy way to get the coals going, it also imparts some of its petroleum essence into the meat.

Is there a better way?

Absolutely. Read on and we’ll discuss the how to make your charcoal burn without lighter fluid.

Why Light Charcoal Without Lighter Fluid?

Many of us grew up with the old backyard lighter fluid method. It’s easy enough: spray the charcoal down with the fluid, toss in a match, wait for it to heat.

The problem is that the chemicals which make up this fluid are toxic in and of themselves. Even if you leave aside the obvious danger of standing next to a fire with a plastic bottle full of an explosively flammable liquid.

While most people are content just throwing their food down as soon as the coals are red hot. But that’s a big mistake. And it’s one that even the best grill can’t fix for you.

It can alter the taste of your carefully prepared meat, leave toxic residues on food, and generally wreak havoc due to the aromatic compounds contained within the mixture. While the boiling point of the compounds is quite low, the process of burning them off takes about fifteen minutes (Source), you’re exposing yourself to the chemicals within if you don’t allow the charcoal to go grey first.

There are also emissions to worry about for those who are green-minded, lighter fluid is still a burning petroleum product even if it seems like a small amount compared to what’s in your car.

Of course, the final ingredient is taste. While this can be avoided, many people use lighter fluid to get old coals going again or simply put the food over them before the fluid has all boiled off. This leaves a tell-tale “off” taste to the meat you’re cooking.

READ NEXT
The Ugly Drum Smoker: Everything You Need to Know!

Before we get into starting your coals off without the use of a liquid accelerant, we need to discuss “quick-light” charcoal.

While handy, the way they work is a bit funky and there is a reason most experienced BBQers avoid them.

These coals are soaked in a petroleum compound before they’re shipped. This makes them incredibly easy to light, just throw a match at them for the most part, it also means that the porous structure of the charcoal is impregnated with the stuff you’re trying to avoid.

That means more “chemical” flavor and vapor deposition of stuff you really don’t want to ingest. Just avoid them altogether, even without the increased carcinogen risk they’re not suitable for anyone who’s serious about the grilling arts.

How to Light Charcoal Without Lighter Fluid

There are a few common methods which people use when it comes time to light up their coals without having to resort to using lighter fluid or another accelerant:

READ NEXT
How to Keep Your Eyebrows: 8 BBQ Grilling Safety Tips

The most common method used is a chimney starter. These handy cans feature a grill at the bottom to hold the briquettes over a source of fire and get started. Since the shape keeps the heat and flame moving directly into the coals it really doesn’t take any longer than the lighter fluid method either.

The most frequently used fuel is paper. But pretty much anything that burns can be used in a pinch to get it going.

Even better, compact chimney starters are easily portable, making them ideal for a barbecue at the lake or beach. They also protect the fire from the wind, something which even lighter fluid can’t accomplish.

The other primary method used is an electric charcoal starter. These are essentially a high-resistance heating element which is placed in a pile of charcoals. The heating element ramps up the heat until the charcoal is ignited.

This usually takes from 10-15 minutes, depending on the model and weather conditions.

While electric starters are slower than a charcoal chimney, they’re not affected by wind at all. And they are the absolute cleanest way to get a fire going since it doesn’t involve combusting anything.

Lastly, some people will simply pile their charcoal and hit them with a propane or MAP gas torch. It’s quick and effective, but not everyone just has one sitting in their garage.

Can I Start Charcoal With Just a Fire?

It’s more difficult than if you have the right tools. But getting charcoal to cooking temperature is perfectly possible with just fire and some fuel.

In this case, you’ll want to carefully create a layer of paper and possibly wood depending on the external conditions. Leave a trailing piece of twisted paper extending from the fuel pile before placing the briquettes.

Place the charcoal in a pyramidal shape for the best results, then simply light the paper and wait. It may take a few tries to get the right technique. But as long as there isn’t too much wind you’ll be good to go in about the same time as any other method.

Some people advocate soaking the paper (Source) in olive or vegetable oil as well, making it more flammable and longer burning and increasing your chances of getting it right on the first shot.

The important thing is to use enough fuel to get the charcoals started. Otherwise you’ll have to tumble the pile and start over again while risking burns from any charcoal that did light.

Grilling Without Fluid: Cleaner and Tastier

Learning how to light charcoal without lighter fluid isn’t just handy for when you don’t have your favorite accelerant around. It’s one of the essentials to getting the most out of your BBQ.

When it comes down to it, the fewer chemicals involved in your grilling the better off you’ll be. The lack of petrochemical emissions is a bonus as well for those who are environmentally conscious.

So, now that you can start your grill no matter what… maybe it’s time to get some new ideas for your next BBQ session. Check out our handy BBQ guides today! 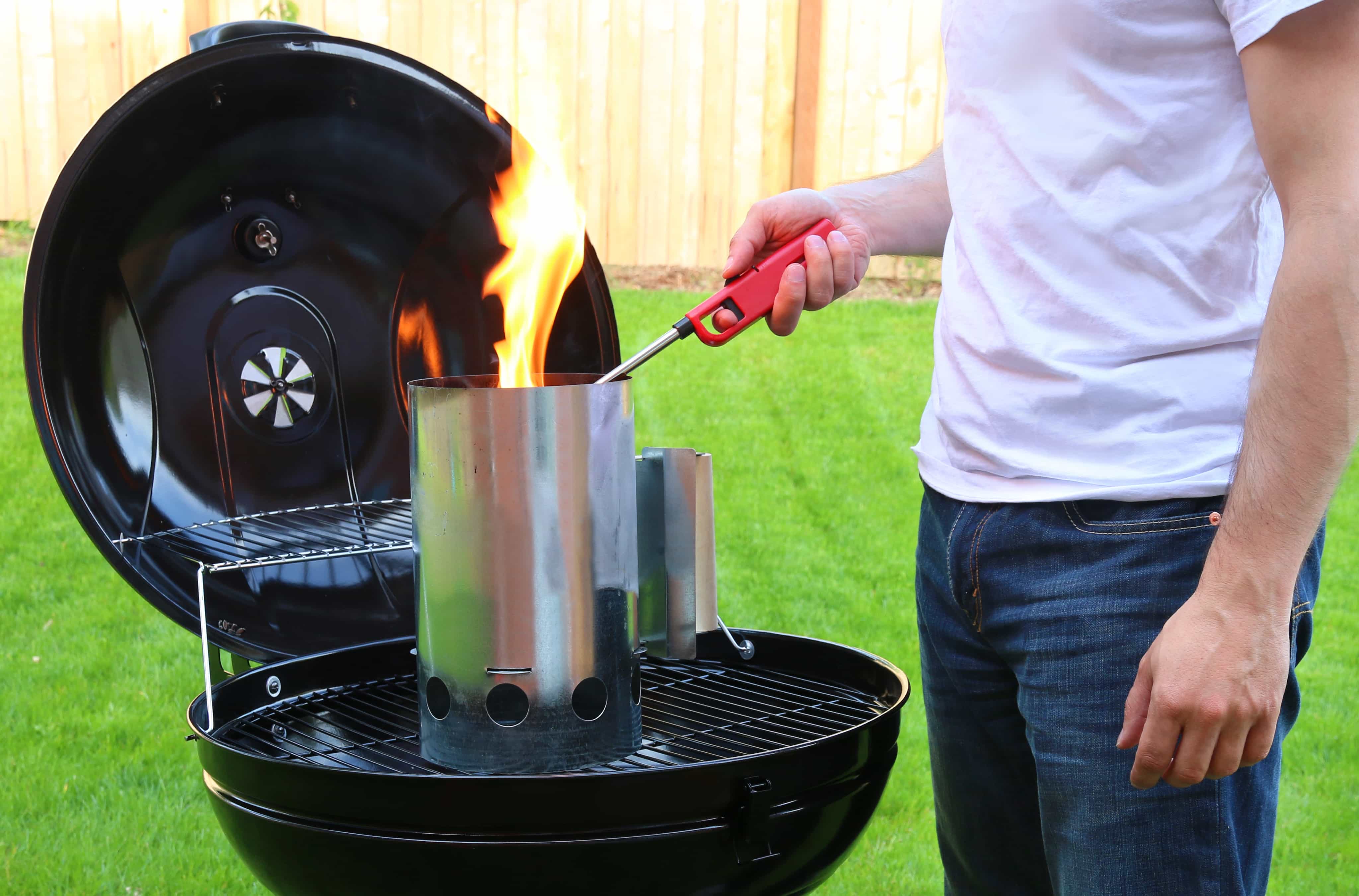 Everything You Need To Know About Kamado Smokers

How To Build Your Own Cool Barbeque Grill At Home

How To BBQ And Grill While Camping

BBQ Grill Accessories – Spotting The Best For You!

How to Clean a Gas Grill: A Step by Step Guide

The Different Types of Grills And Smokers For BBQ