You don’t need to be a fan of K-dramas to enjoy Korean barbecue! If you’re interested to learn more about Korean BBQ, this is the only guide you need to read.

Even if you’ve never had it, you’ve most likely heard of Korean barbecue. In fact, it’s becoming so popular that traditional foods like gochujang and kimchi are becoming included in more standard American restaurant menus too.

So what exactly is Korean BBQ? For one thing, it’s not just a meal but an entire experience. With Korean BBQ, the cooking is just as big a part of the meal as the eating is.

Continue reading and we’ll walk you through everything you need to know about the food craze that’s sweeping the country.

The History of Korean BBQ in America

In the meantime, Chinese, Japanese, and Thai restauranteurs took a more aggressive marketing approach. They created dishes like pad Thai and General Tso’s chicken, sweet and simple foods that catered to the American palate.

As some adventurous Americans began to grow tired of these traditional staples, they started to look to more “exotic” cuisines. Korean BBQ seemed to be the relief they were looking for. And because Korean BBQ hardly uses any bread, it became a hit with dieters too.

In today’s health-obsessed world, Korean BBQ is great because it focuses a lot on seafood and vegetables, not to mention a variety of grilled meats which people on a paleo diet go crazy for.

In a traditional Korean BBQ restaurant, there will be a charcoal grill in the center of the table with big exhaust fans above it. Home chefs can use an electric Korean BBQ grill to recreate the experience or even just their own charcoal grill.

READ NEXT
The Best Korean BBQ restaurants in Los Angeles

Just be sure to wear some protective gloves if you’re doing it at home.

When you go to a Korean barbecue restaurant, be prepared to be surrounded by smoke and the smell of cooking meat. These smells will stick to your clothes, so keep that in mind if you have plans for after and don’t want to smell like some tasty bulgogi.

Be ready to move fast because the meat cooks quickly. This also helps make it super juicy and flavorful.

Although you can have some delicious fish and vegetarian dishes, the real star of the show is the meat. One of the foundations of Korean BBQ is Maillard, which is rendered fat and charred meat. The Maillard reaction is what gives seared meat its distinctive flavor.

There are plenty of other elements at the table that are all going to play big roles, but grilling the meat to just the right amount of seared is the most important aspect. Whether you’re going to a restaurant or holding a Korean BBQ dinner party at home, you’ve got a lot of options for which meat to choose.

The most common proteins are pork and beef. And depending on the cut of meat, you can marinate it before cooking or just season and then grill.

Let’s take a look at some of the most popular meats you’ll find at a Korean BBQ. The food you choose to eat should showcase the interplay of spicy, bitter, savory, sweet, and fermented flavors.

Beef is the meat that most people think of when it comes to Korean BBQ. Like with cooking most steaks, tougher cuts are going to be marinated before cooking, while prime cuts will be minimally seasoned before being cooked.

Bulgogi is usually made with thinly sliced brisket, ribeye, or sirloin. Galbi is Korean short ribs. Both of these types of meat are on the tougher side and utilize a sweet/savory soy marinade with a soy sauce base.

This marinade shouldn’t be overwhelming as it should complement the meat, not overpower it. The sauce generally has hints of Asian pear, mirin, brown sugar, and sesame oil.

When getting beef for bulgogi or galbi for a home-cooked dinner, pick up cuts that you can find easily and that work with your home grill setup. For bulgogi, only prepare it on the grill if you have a wire mesh rack. That’s in order to keep the small beef pieces from falling right through the grill grates.

Otherwise, it’s better to just cook the bulgogi on your stovetop in a cast iron griddle. With galbi, look for flanken-cut, LA-style short ribs. Remember that these cook pretty quickly so you’ll need to be using very high heat to properly char them.

That’s why a charcoal grill would work best.

Unlike the marinade that’s used for galbi, the gochujang–based one that is used with pork for dwaeji bulgogi is quite powerful. In Korean barbecue, pork is considered to be more intense, as opposed to beef, which is usually loved for its meaty, clean flavor. Thus, pork is often mixed with more intense ingredients.

The flavors of dwaeji bulgogi and galbi contrast nicely. And it’s easy to grill them at the same time.

Similar to the beef, cooking extremely thin pieces of pork is hard to do on a gril. It’s difficult to char the meat without overcooking it, and the meat can easily stick.

You should try to go with cuts that have plenty of fat on them. Examples of this include Boston butt or belly.

Pick cuts that can be cut into pieces around half an inch thick. This will make them ideal for grilling and for marinating.

Buldak, or “fire chicken,” is a great alternative for people who don’t want to eat pork or red meat. Buldak takes advantage of a sweet/spicy sauce, similar to dwaeji bulgogi. In this circumstance, the sauce gets mixed with chicken thighs that are bone-in.

READ NEXT
How To Plan The Ultimate Backyard Barbecue?

The sugars in this sauce will caramelize and char while the Buldak is being cooked on the grill. If you want, you can cover the chicken with some melted and gooey cheese. Or, you can just cut up the moist dark meat into tiny pieces and eat them as they are.

Whether you are cooking with beef, pork, chicken, vegetables, or seafood for your Korean BBQ dinner, you will have to include some ssamjang with the meal. This is for spreading over the cooked food.

Ssamjang is a stir-together dipping sauce with no cooking involved. A staple of Korean BBQ, it combines the sweet heat of gochujang (chili paste) and the savory flavors of doenjang, a soybean paste.

The marinade is rounded out by sesame seed and toasted sesame oil. These give some bitter and roasted flavors. The scallions and fresh garlic help make it even more delicious.

In English, Ssamjang translates to “wrapped thick sauce.” This pretty much tells you what its purpose is. The sauce is often used on perilla leaves and lettuces. The marinated greens are then wrapped around the grilled meat pieces.

How much ssamjang you use depends on the type of meat that you end up eating. Because beef galbi has a subtle flavor, it can handle a lot of ssamjang. Dwaeji bulgogi, on the other hand, is already pretty intense, so you will most likely use less for this type of meat.

The Ssam: Perilla Leaves and Lettuces

In order to create those wrapped meat pieces, you are going to need to have some greens. And those greens in Korean BBQ are perilla leaves and lettuces.

For lettuces, you are going to want to pick from the leafy varieties. Pick ones like Bibb or red leaf. The leaves are going to have to be sturdy and big enough that they can hold in the other ingredients without tearing.

READ NEXT
BBQ Grill Accessories – Spotting The Best For You!

But the greens will also have to flexible enough so that they can wrap around the proteins and not break. Try not to use romaine and other rib-heavy greens. These kinds will easily snap right down the center when you try to wrap them.

The perilla leaves and lettuces aren’t just there to hold the ssamjang and grilled meats while you eat, though. They also provide a refreshing herbal and crisp contrast to those other foods.

Be sure to take good care of the greens so that they don’t end up turning brown and gross by dinner time. Also, make sure that you give those leaves a thorough wash and then dry them completely.

Store the greens on a plate underneath a moist paper towel, and keep the stored leaves in your refrigerator until it’s time to eat.

Although the grilled meats and ssamjang are the foundations of Korean BBQ, there are a number of key players that help make this cuisine so beloved. Many of those players are the variety of finishing garnishes. Sliced scallions, garlic cloves, thinly sliced green Korean chilies, and toasted sesame seeds are all worth having available.

One pro tip is to combine a few tablespoons of oil with sliced garlic in a bowl. Then place the ingredients right onto the grill. The result of this will be toasted garlic as well as an aromatic and bubbly garlic oil. You can then drizzle this tasty oil over the meats once you remove them from the grill.

The Side Dishes: Banchan

Every Korean BBQ table should save some space for a spread of banchan. Banchan is a word that is used to refer to the many little side dishes which help to keep your palate alive and excited.

Examples of banchan include kimchi, fermented and pickled vegetables, rolled omelets, dried stir-fried anchovies, marinated greens such as spinach and watercress, and more.

READ NEXT
Everything You Need To Know About The Smoker Oven

Although you can definitely make banchan on your own, your local Korean market most likely prepared sides too that you should consider trying. There’s already so much to focus on that buying pre-made banchan can be a big time saver.

With all of this heat, meat, and salt, you’re definitely going to want to have plenty of drinks on hand. It’s not uncommon for people to just start sweating midway through their meal.

In Korean culture, drinking is seen as a social activity. One form of etiquette is to pour the glasses for everyone at the table, going from the most to least senior person. You should also accept a drink with two hands and take shots as a group.

This all helps to make the Korean BBQ experience more communal and more fun.

Because there is often so much eating going on, you’re going to want to pick beverages that are light on both the alcohol content and the body. Let the meat fill you up, not the alcohol.

For example, if you wanted a beer with your galbi, you’d be better off going with a light pilsner as opposed to an IPA. Makgeolli is a milky wine that’s made from water, rice, and nuruk and is great to have at the table. And when you’re feeling sluggish, pour some small soju shots for everyone to rally the spirits.

If this article didn’t make your mouth water, you might want to see a doctor. And thanks to the growing popularity of Korean BBQ, more restaurants are popping up all the time! Or why not purchase a quality grill, call up some friends or coworkers, and get ready to throw a dinner party to remember.

Interested in reading other great articles about all things grilling? Check out the rest of our blog today! 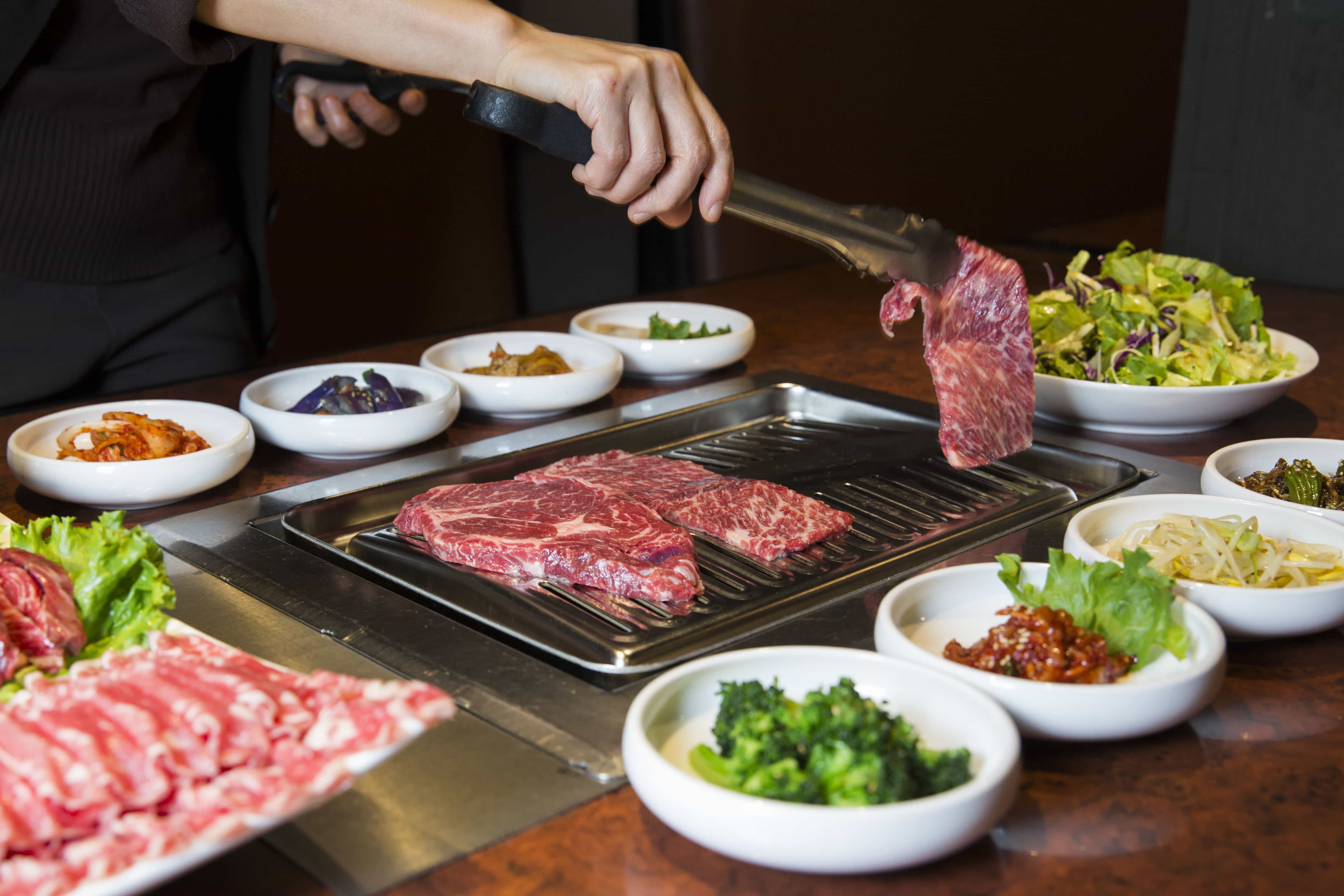 The Ultimate Guide to Gas Grills

How to Light Charcoal Without Lighter Fluid or Accelerants