Nothing goes better with delicious tasty BBQ than a nice cold beer. Check out this beer pairing guide to see which brews to drink with your BBQ.

There’s no better feeling than having your barbeque along with the perfect beer to gobble down your throat. Coming up with the right beer pairing is not an easy task. Your taste buds have to be top notch.

While serving the dish, you should use the same beer that was used to prepare the meal.

Here are some of the critical things you should consider before deciding on which beer paring you will use;

The taste of the beer plays a determinant role on which kind of barbeque delicacy will best suit it. Another great thing to put into context is the alcohol content in the beer. It affects the mouthfeel and the general taste of the beer.

There’s a variety of beer pairings available hence it’s advisable for you to do a lot of the dirty work to ensure that everybody has a good time.

We will take a look at some beer pairing guides that will turn your head.

Amber pale is famously known for having its hop ranging from low to high and having high amounts of malts. They can also be brewed with red ales.

Most amber ales have a crispy and dry finish and tend not to have the sweetest of flavors. However, it is this kind of finish that makes the Amber pales go gallantly well with almost everything off the grill and red meat.

This is one most used beer while implementing pairing. It’s a light beer. Therefore you can always move to a heavier beer as time progresses. Pilsner has a unique hop in its taste and works well with salty dishes.

It can also be used with a host of other dishes, but of course, it works wonders when the barbeque is on the money. One of the pilsners’ most known qualities is that it stimulates all sensations at an equal measure and not forgetting its cascaded carbonation.

Its aroma comes from hops, and the malt in it brings about the little sweetness. Pilsner can either be used as an entry while starting to eat as well as be a good option for dessert. It’s for this reason that’s widely used in a pairing.
It does well with chicken, beef, pork, and duck — all in barbeque.

Wheat beers are one of the most flexible beers when pairing. It is because it can be paired with a variety of meals. This comes in handy for barbeque meals.

There are two main ways of pairing wheat beer. It can either be done in the banana and clove flavor or the Belgian aromatic way. These two methods are also dependent on the type of yeast used. It is therefore not compulsory for you to find the said ingredients in the wheat beer.

Some wheat beers are also very spicy. You have to be keen when you are choosing the kind of barbeque dish to pair it with to avoid the delicacy being too heavy.

Due to the massive amounts of wheat found in the beer, it tends to be cloudy in color; it’s mostly found in pale yellow or gold. It also gets impressive when used during warm weather.

Wheat beers tend not to have flavors, primarily when used in conjunction with barley grains. Many processers, therefore, add citrus to make it more enjoyable to drink.

Smoked chocolate, coffee, or malts are mainly used in the production of porters so that they can be able to get along with the burnt flavors. Porters hop is slightly bitter compared to other beers.

Nowadays, porters have been able to be manipulated to facilitate the creation of different types of flavors. It is mainly found in a silky and thick form, which is slightly different from other forms of beer. They also have a crispy touch and finish.

It’s believed that during the production of porters they are also kept in whiskey barrels so that the flavor and the deep color can be enhanced. Porters flavor is rich and deep. For this reason, it’s advisable for you to serve it with food that has the same feel and texture to complement each other. It’s best served along with steak pie and beef.

Stouts are generally regarded as porters’ relative because of the many similarities that they have. Most of its ingredients are burnt malty. It is widely believed that its discovery was by pure accident a brewer overcooked the malt.

They are dark and black. Just like porters, stout is also silky and smooth and doesn’t contain a high alcohol level. It is also available in different variety courtesy of its inherent manipulative nature. Irish stouts are smoother while imperial stouts are stronger and also has more alcohol content.

Because most of its flavors are relatively close to different types of edibles, stouts are used commonly for desserts. In most cases, people have it together with a mixture of vanilla ice cream to make it better.
It pairs excellently well with barbequed ribs.

Fruit beers are technically created out of various fruit extracts. Different flavors are later created to provide a wide range of the market to make everyone catered. The fruits can range from lemon, bananas, strawberries, apples, and cherries.

Many brewers also mix a range of fruits to come up with a unique and varying taste. A lot of people prefer fruit beer because they offer a distinct taste of sweetness, breaking the monotony of bitter beer.

READ NEXT
This is The History Of Barbecue

The fruit shouldn’t be sweeter than the beer; it will overshadow the whole essence of taking a beer. It will be an equivalent of a fruit juice.

You should be keen to complement the barbeque and the beer. If you feel the need of being more industrious is stronger than becoming normal, try not to contrast the beer and meal sharply.
Pairs well with barbeque meals used as appetizers.

Lager is one of the most commonly used beers around the world. It’s widely thought that its distinct refreshing flavor gives it a niche over the others. It’s also the palest of all the beers.

A refreshing flavor will undoubtedly match any biting and save you a massive amount of time trying to find the right pairing. The beer’s main ingredient is barley; it brings about the unique character of the beer.

Some of the barbeque meals that can work correctly with the light lagers are fried fish, Buffalo wings, and any poultry.

This beer has bitter taste. It’s for this reason that most brewers put additives to make the beer more ‘friendly.’ It’s amber in color.

The bitter nature of the Indian pale ales is brought about by the use of hops during the production process.

They come in very little variety hence making it easy to find the right pairing to suit the event. It has grown to be the most common beer that has hop as an ingredient. The different distinct aroma is brought about by the unique additive the brewer chooses to use during the beer’s production.
India pale ales work perfectly with barbeque steaks, mozzarella sticks and ribs.

READ NEXT
15 Best BBQ Tools Every Grill Master Should Have

Brown ales also have a feel of chocolate and coffee, just like porters and stouts. They are however not as bitter as the other crop of beers. They instead have a nutty and dry flavor.

Just like the lager, brown ales is a very versatile beer and can be used to pair with a lot different barbeque options. They pair well with roast pork and fish.

Unlike the light lager, dark lager has to be sweetened to come up with the refreshing taste his brother offers. Caramel syrup is the most used substance to perform the magic. As much as the caramel tries to reduce the bitterness, it can still be felt from afar.

The one main ingredient in the production of dark lager is roasted malts. Dark lager tends to compliment a lot of traditional European foods. It’s for this reason that its popularity hails from the countryside compared to the urban areas.

The Taste Will Determine Your Choice

It’s fair to say that beer pairing is an art. It is therefore essential for you to do enough background check on the beer and barbeque of choice.

The choice of beer is a steering factor that will decide whether the whole set up is failing or success. Ensure you know the quantity of alcohol before serving. It massively affects the taste of the beer and barbeque meal. 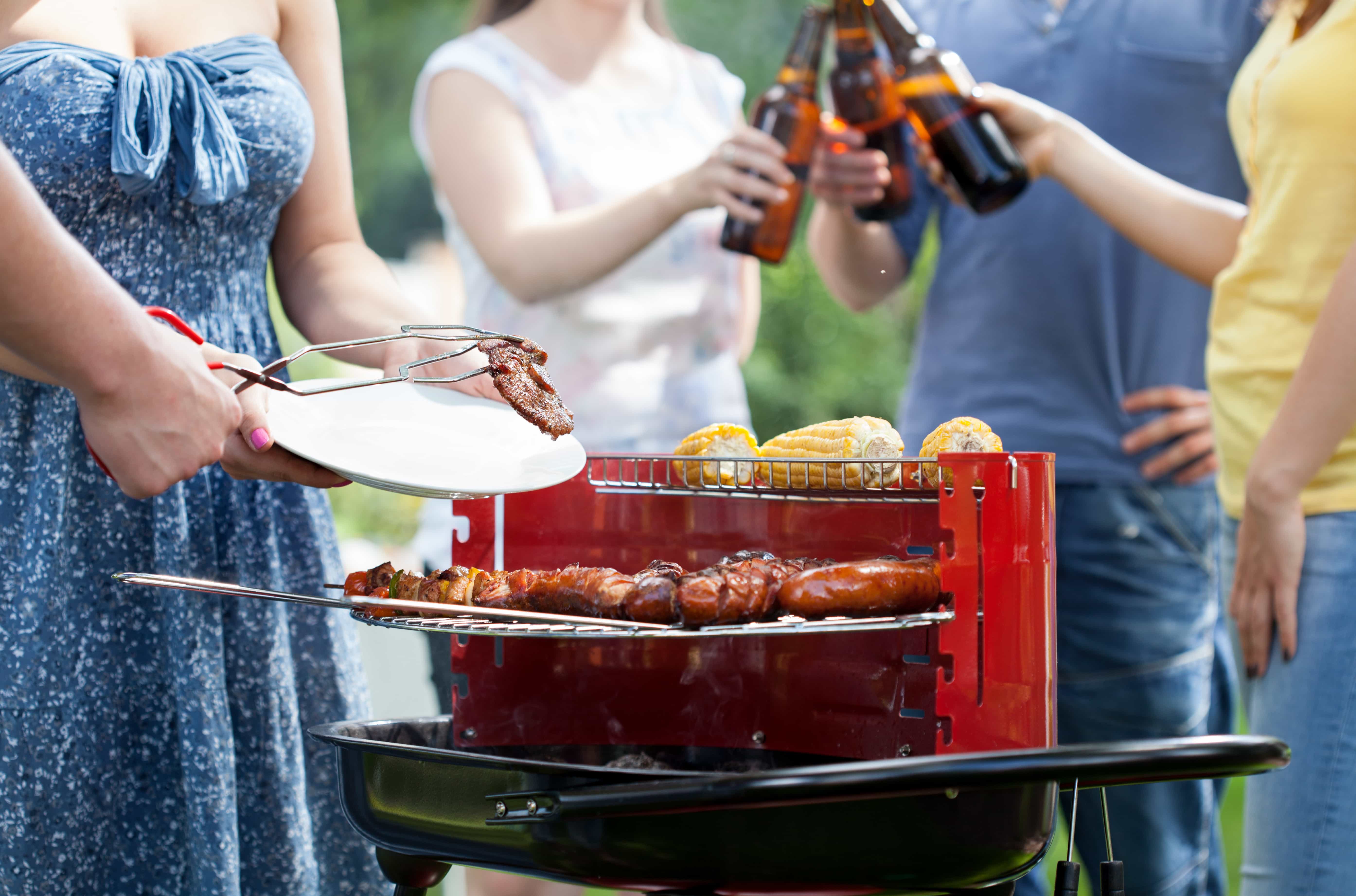 How to Make BBQ Chicken Wings at Home

How To Use An Electric Grill: A Beginner’s Guide

Everything You Need To Know About The Smoker Oven

This is The History Of Barbecue