In this article, we’ll be going briefly over the basic design of kamado cookers and how they work. After all, it could very well turn out that it’s precisely the right sort of cooker for you.

Should you be a fan of vintage cooking and kitchenware, then odds are that you’ve heard of kamado stoves, traditional cooking devices (dating back thousands of years, evidence indicates) which originated in Asia.

However, in recent years, these stoves have begun to enjoy measurable popularity in the Western world, due in great part to their innovative design.

History Of The Kamado Smoker

Although the name “kamado” (which translates more or less to “stove”) is Japanese in origin, archaeologists reckon that the earliest prototypes of what would become the kamado stove were basic clay stoves found in China, dated at about 3,000 years old.

The traditional design, it is reckoned, is an improvement of these early stoves, fashioned out of ceramic rather than clay for better heat containment. Other stoves popular in the region, such as the Indian tandoor, may also have influenced the development of the kamado.

It was just after World War II that Westerners began to become aware of the unique functionality of the kamado stoves; and shortly thereafter, American entrepreneurs began developing their own spins on the traditional kamado cooker. Among them was Ed Fisher, who, in 1974, put out his own particular line of kamado stoves – a line which would become the foundation of Big Green Egg Inc., now one of the world’s most successful kamado companies.

Perhaps one of the primary reasons for the growing popularity of kamado stoves over here in the West is how versatile they are in their potential uses.

READ NEXT
The Best Charcoal For Grilling: Charcoal Buying Guide

In the West, kamados are often popularly referred to as “grills”; however, due to the way that they retain heat, grilling is only one of the cooking methods that they can be used for. Altering the amount of fuel, the food’s distance from the fuel, and the airflow through the device also makes it possible to use it for roasting or high-temperature searing, or for much slower cooking methods like baking or slow smoking.

As mentioned earlier, traditional kamados were usually fashioned from ceramic, an improvement over the usual clay of the time; not only did it retain heat better and distribute the heat more evenly, but the ceramic was far more durable. Even today, another well-loved aspect of kamado cookers is that, when properly cared for, they maintain their integrity for years.

Moreover, these material advancements have continued into the modern age; and while, for the most part, kamados are still fashioned from ceramic (albeit usually a modern variety that cracks far less often), many incorporate other materials too. In particular, many modern kamados are now sold with thin metallic shells that enhance the heat retention abilities of the ceramic.

Although there have been attempts to craft new-fangled spins on the kamado that run on electricity or gas, another major reason for them being popular in the West is that they can be fuelled with natural alternatives like wood or charcoal.

Unsurprisingly, given the traditional roots and long-running history of the kamado cookers, lump charcoal – the more natural, less processed, more ecologically friendly alternative to briquette charcoal – has proven a particularly popular fuel source for kamado cooking. Lump charcoal produces much less ash than briquette, and, due to its unprocessed nature, lends the food a much more appealing flavour.

This makes it an especially ideal fuel option for the kamado, due to its particular structure, which sends an air flow directly through the fuel toward the food.

Kamado stoves are especially marked out by their very distinct structure. In simple terms, the modern kamado is defined by a distinct rounded shape, and a vent in its underside that allows for easy air flow through the structure, sending the heat from the fuel up toward the food.

In terms of components, meanwhile, there is obviously some variety, given that there are a number of major companies manufacturing kamado cookers, many of them attempting to put a distinctive spin on the standard kamado formula. However, there are, for the most part, a number of components you will find in most kamados.

For instance, the vents. As mentioned earlier, one of the most distinctive features of the kamado cooker is that it is structured with a vent in its underside that sends air up through the fuel toward the food.

For the most part, modern kamados will allow users to control just how much air is allowed to flow through this vent. This, as it happens, is one of the kamado’s appeals, as this is the main means of controlling just what sort of “style” the food is cooked in.

However, many modern kamados have also worked vents into the very top of the cooker – usually ones which, like the bottom vents, can be opened or closed at will. These allow for further alteration to the cooking style, as it allows the user not only to adjust how quickly the cooker heats up, but also how quickly it releases its smoke and heat.

READ NEXT
The Ultimate Guide to Gas Grills

In addition, many modern kamados include built-in thermometers that allow the user to monitor the heat of the device and shoot more accurately for the heat level best suited for their favoured cooking style. Because of the open structure of the kamado, these thermometers often cannot be counted on to reflect the exact temperature of the entire structure from top to bottom. They nonetheless are an extremely useful asset when it comes to cooking up that ideal outdoor meal.

Even the most basic components, such as the lid, are essential elements of what makes kamado cooking so unique.

Most modern kamado lids – which are generally dome-shaped – are often lined along their rims with a felt-like material that allows as little air and heat as possible to escape. This is an essential aspect of the highly customisable cooking styles that the kamado offers. For this same reason, the user ought to make frequent check-ups on the lid in order to ensure that its integrity is maintained – its rim lining should be kept clean and even, and its hinges should be regularly tightened.

The kamado’s grate – which, like most standard cooking grates, is generally fashioned from stainless steel – is, of course, another key aspect of the distinctive cooking styles that the kamado allows for. Many models of modern kamado allow for the grill’s level to be changed or adjusted, which allows the user to drastically change the level of heat that the food is exposed to, and thus adjust the degree and the speed of cooking.

In addition, the more adventurous cooker may choose to customise the grill, adding grills of different materials, or griddles, gridirons, racks, spits, and other cooking surfaces and tools that might allow for more thoroughly customised cooking. It’s the perfect way to really make your next meal unique.

Then there’s the fire box. In the most basic terms, the kamado’s fire box begins where the lid and grill end, with the bottom vent just beneath it. This section of the cooker is where the fuel is placed and lit. Most kamados are constructed with a “fire ring”, which is a ceramic ring that keeps the grill separate from the fire box, and a fire grill, which filters smaller pieces of fuel debris to the bottom of the fire box.

Like with any outdoor cooker, it is, of course, important to keep the kamado’s fire box clean and free of debris. However, due to its rounded structure, it is relatively easy to clear out fuel debris from the standard kamado – especially if, like many other kamado users, you opt to make use of more natural, less ash-heavy fuels.

Of course, some models of kamado go for a more complicated or minimalistic approach; and those with a taste for engineering their own particular outdoor cooking experience might opt to customise these traditional stoves in some way or other.

However, for your first time cooking on a kamado, we’d personally recommend just making use of what comes packaged with the device itself. It’s always a good idea to get accustomed to a particular cooking style before attempting to give it your own particular twist.

Outdoor cooking is never a risk-free experience; and while most experienced folks know how to approach it safely, there’s a few basic safety pointers one ought to keep in mind when cooking up your next meal on a kamado.

As we’ve made pretty clear here, kamado cookers’ unique cooking style comes from the steady flow of air that comes through its bottom vent. However, a consequence of this is that, when the airflow is particularly strong, the heat – and flames – move upward at a potentially dangerous rate. As a result, opening a kamado’s lid too quickly, without standing properly clear, presents the possibility of heat- or fire-related injury.

In addition, whilst there has been the occasional attempt to manufacture kamado cookers that run on more modern forms of fuel, it is highly recommended that you never use any lighter fluids or chemical fire-starters in your kamado. Besides the fact that they are a lot less friendly for the environment than lump charcoal or wood, the persistent air-flow through the standard kamado means that your food is likely to come out with a distinct chemical taste by the time it is done.

In many ways, the kamado smoker and grill is more or less the perfect option for the outdoor cooking enthusiast. Offering up a single, convenient platform for a great variety of cooking styles, this cooker, with its simple structure, has, for generations, been built for easy maintenance and years of usage. And with the proper fuel, its natural materials will blend delicious natural cooking with a minimal impact upon the environment.

In brief: low maintenance, high quality, tremendous simplicity. There really isn’t much not to love about cooking on a kamado. 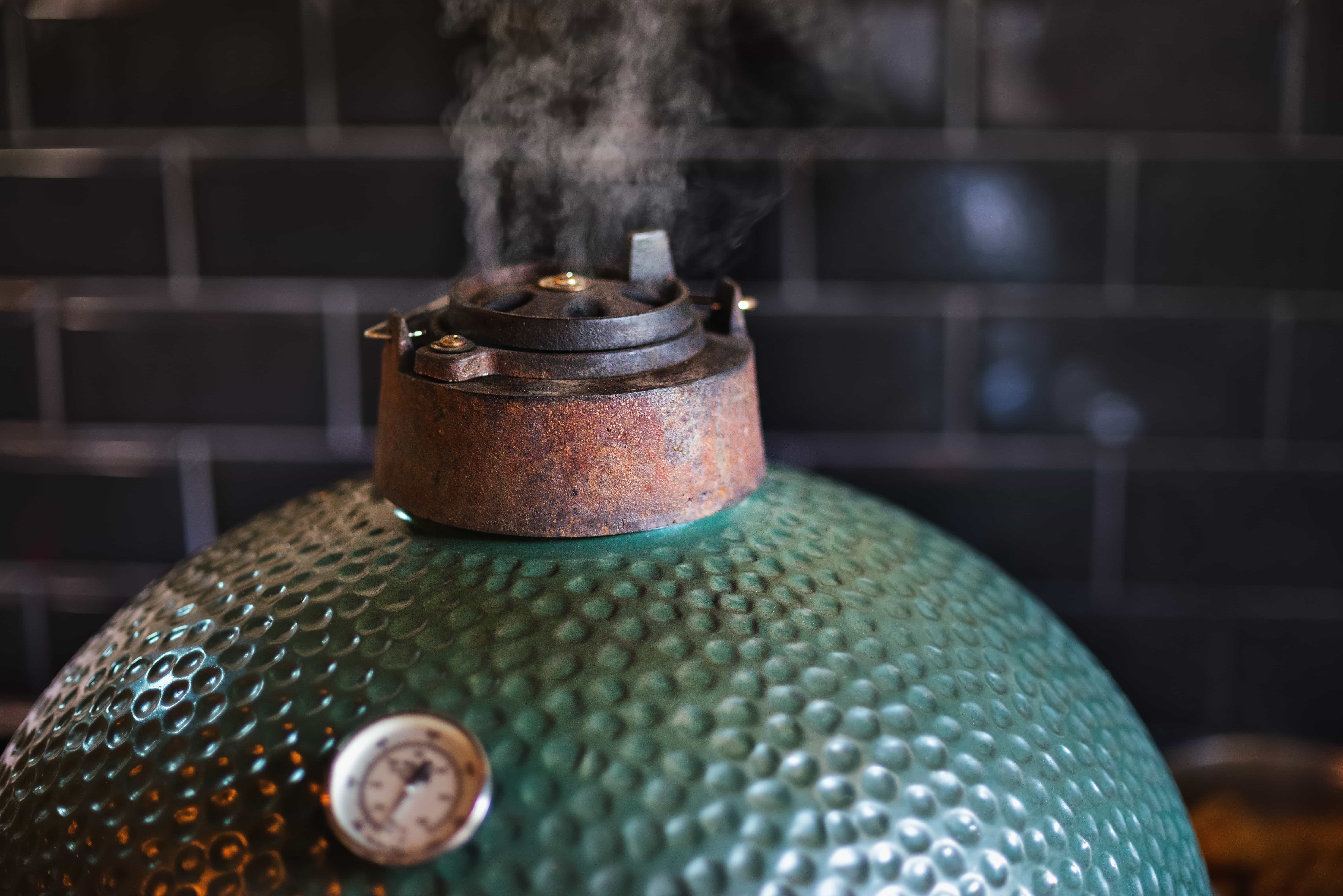 The Best Offset Smokers And How To Use Them

The Best Barbecue Style? All About Kansas City BBQ

What You Need To Know When Choosing A Meat Smoker