Want to take your passion for BBQ to the next level? Here are the best BBQ festivals and events in the USA.

If you’re someone who loves to cook barbecue, you know that trying your friends’ recipes can be one of the best ways to learn. You can’t hope to taste all there is if you’re stuck to the food of you and your neighbors, though.

Attending BBQ events is the best way to get out there and learn something from the best of the best. These events are also just a whole lot of fun. You can make connections, taste delicious foods, and learn a little something about how to make better food.

We’re going to cover a number of the best BBQ festivals available to you in the USA. Hopefully, one or two of these events will seem exciting to you and are near your hometown.

Best BBQ Festivals in the USA

We’re going to try and list events that span the country, giving you a better opportunity to go in and check one out. If you’re not seeing anything on the list that would be a realistic option, you can always see what your own community has to look at.

READ NEXT
Backyard BBQ: A Complete Guide For Beginners

There’s no shortage of people who love to cook for themselves and others. And your town likely has a food festival or two, even if they aren’t specifically geared toward BBQ.

The so-called barbecue capital of the world is Lexington, North Carolina. We’re sure there are thousands of people who would say otherwise, but it’s hard to challenge their title when they have such a great output of barbecue foods.

Their festival, The Barbecue Festival, takes place every October and will leave you in BBQ heaven. The variety of foods available at the festival is almost never-ending, and there’s a number of other things for you and the family to do while you’re there.

Carnival games, races, sculptures, and people watching all await you in Lexington as well.

It seems as though really great chefs tend to go to big metropolitan cities to test their stuff. So, while you probably don’t think of Manhattan when you imagine barbecue food, you’re going to be really happy with the quality of the BBQ you find there.

Additionally, there’s nothing like a great block party. Getting engaged with a community through food is one of the best ways there is to understand a place. The party isn’t just for people in Manhattan, though, and some of the best pitmasters in the country and even the world come out to show their best work.

On top of all of this, there’s live music, vendors, and a number of festivities that don’t always come with BBQ festivals. If you’re in the New York Area, it wouldn’t hurt to learn more about this party and swing by when you have the chance.

READ NEXT
Everything You Need To Know About Kamado Smokers

Good food, good tunes, good people. Texas is another place known for the integrity of its barbecue, so it makes sense that a BBQ festival in Texas would be exceptional.

You get the chance to experience some of the specialties from a number of Texas’ most highly regarded pitmasters. When you’ve got your food, enjoy some of Texas’ best beer and relax to the sounds of great music. The festival has historically hired huge acts, many of which have won Grammys.

Take a trip down to Frisco, Colorado to experience the BBQ challenge. It’s almost been a running festival for a quarter-century, and it hosts scores of competitors who are trying to come out as the top pitmaster of the event.

While the pitmasters are cooking up your food, you can enjoy the grounds, listen to music, appreciate Colorado’s beauty, or toss a few back while you take it all in.

On top of the normal festivities, you get to appreciate a classic car and motorcycle parade and a stunt team which puts on a show.

If you’re a fan of blues music and barbecue, the W.C. Handy Barbecue festival is going to be something of a religious experience for you.

Travel down to Henderson, Kentucky and make sure you have an empty stomach. While the majority of the festival is focused around blues music, there’s no combination better than blues and barbecue and you’ll be able to enjoy both.

Washington, D.C. is home to one of the nation’s largest BBQ competitions. On top of the great food, you’ll have the opportunity to listen to music, speak with authors of cookbooks, and much more.

You can even sit in on some demonstrations from top chefs who are willing to let out a few of their secrets.

The final festival on our list takes place in Santa Clara, California and is a whole lot more than just a barbecue festival. You’ll be able to enjoy all of the proceedings of a great BBQ event, but there’s more to it.

The event is host to a full-fledged amusement park that can entertain anyone in the family for days on end. That includes rides, games for your kids to play and win prizes with, a whole lot of barbecue options, and a grand finale that includes a firework show.

The event is more of an all-encompassing experience than a festival. It strikes at the heart of what it means to be an American, eat American food, and enjoy the company of an entire community.

There are a couple of reasons you might want to attend one of these events. The first is simply that they are extremely fun ways to make memories, spend an afternoon, and learn a little something about how to improve your BBQ game.

The other is that you would like to participate as a competitor. If this is the case, make sure that you start taking steps well in advance of the competition or festival. Contact the people running the festival, block party, or event, and see what it would take to find a spot selling food or competing.

READ NEXT
How To Prepare For A BBQ: Tips To Plan And Nail It

You may need to start small and work your way up the chain in the BBQ world. You can be sure that you’ll have luck competing and participating in local events around your area.

In fact, you must do this in order to get feedback from other BBQ lovers, earn credibility, and find your way to the bigger, more prestigious festivals.

Deciding Which Festival to Attend

It’s likely that you’re going to attend the festival that’s nearest to you geographically. At the same time, you might not be situated near any of the events listed above.

In that case, there are a couple of things you should consider when trying to find the right BBQ event for you.

If you’re going to travel a great distance to go to a festival, you want to make sure that it’s going to provide enough entertainment to be worth the trip.

Try and find an event that goes over the course of an entire weekend. These events are typically huge, having a number of accommodations for those who are traveling to attend. They can help you find lodging, provide suggestions for exploring the local community, and more.

The point is, unless you have a really good reason, don’t drive two days to attend a festival that only lasts one afternoon.

2. Other Forms of Entertainment

Another thing to consider is whether or not the festival pairs BBQ with something else you enjoy. As you probably noticed, the events listed above typically have live music and festivities.

READ NEXT
How Much Meat Should You Serve Per Person

Just because your final destination is a BBQ event doesn’t mean that you have to limit your trip to one end. If you’re going on a road trip, pick your destination based on the other national landmarks and places you could stop on the way.

Even if you’re flying you could still explore local options for day trips and other additions to the experience of attending a BBQ event.

You can even look at a calendar view of numerous barbecue festivals and try to hit a number of them on your path to your main destination. Touching on a few festivals might be the best way to gather experience and knowledge about BBQ and return home with some highly-refined skills.

Attending a BBQ event doesn’t have to be the only time you get in touch with others who love barbecue. There’s a community out there, full of people who can teach you things, share ideas, and give advice on how to take your skills to the next level.

Explore our site to get more information about BBQ and those who love to cook it. 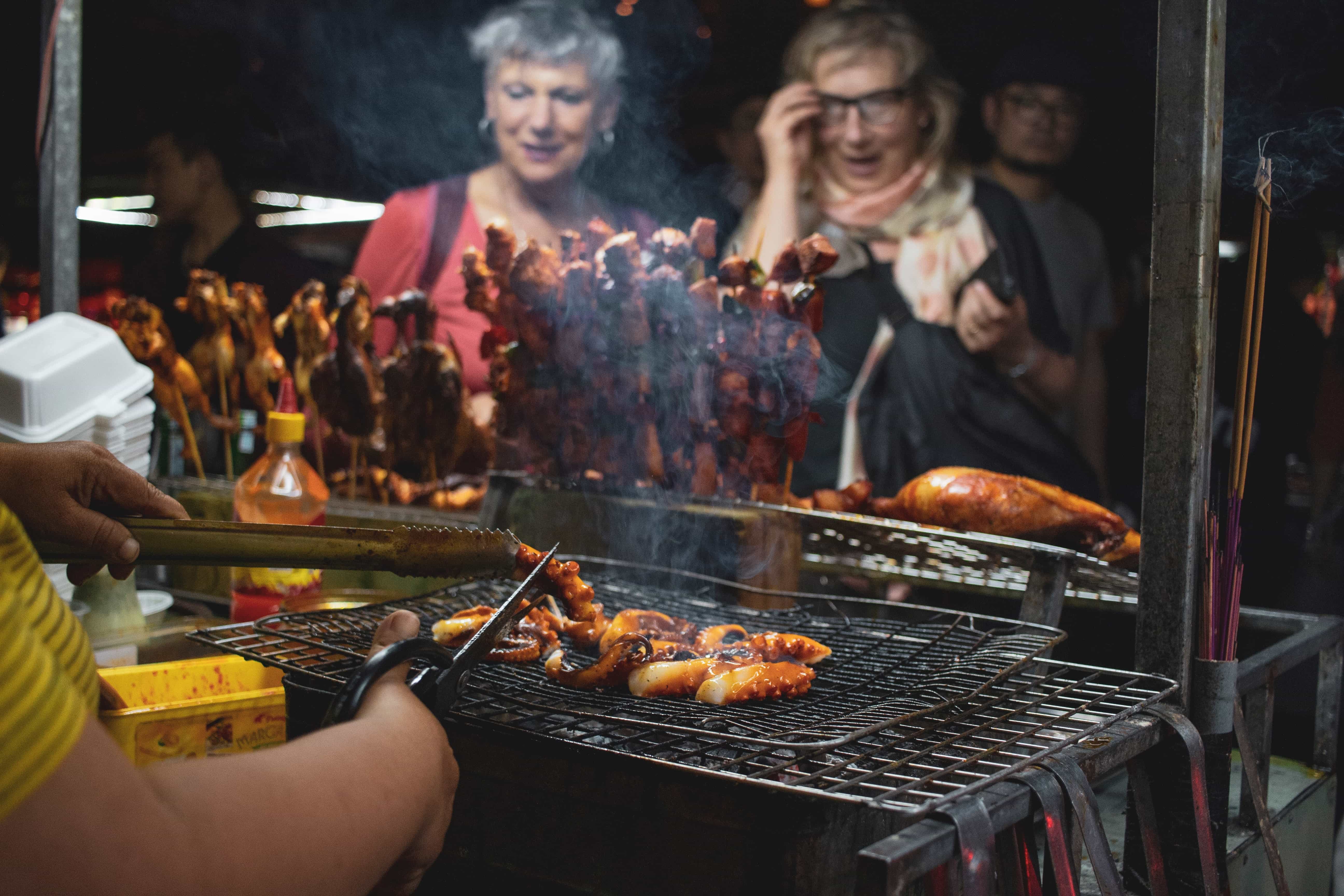 BBQ Grill Accessories – Spotting The Best For You!

Everything You Need To Know About Kamado Smokers

How to Clean a Gas Grill: A Step by Step Guide